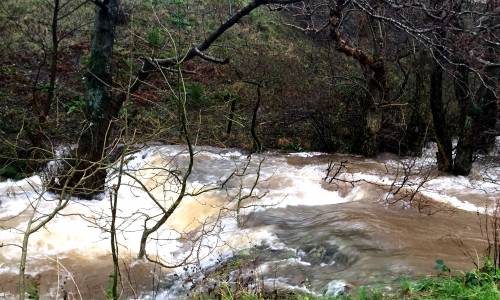 As most of you will have seen on the news and in the national press, the floods of the past week have created chaos and devastation throughout the whole of the region and Howtown was no exception! With the large amount of rainfall which had already fallen during October and November, the rivers, lakes and reservoirs of the Lake District were full to capacity before Storm Desmond even made itself known.

As over 300mm of water gushed down the fells in under 24 hours, the rivers became torrents, unseating boulders, wrenching trees from the ground and bringing down a force of earth and slip which crashed through the valley, flattening walls and boundaries and creating landslides which made the road impassable as on the other side, the lake flooded over the fields and Howtown Pier disappeared underwater within hours.

As the hotel was in danger of being flooded from both the rising lake waters from the front and the rivers running down the fells behind, members of the local community, Howtown Outward Bound, friends and families worked heroically throughout the afternoon and night, ensuring that the hotel did not sustain excessive damage.

Mrs Baldry's legendary Howtown Soup together with a plentiful supply of food from the hotel helped keep spirits up in these exhausting times, we can only be thankful that no one has been hurt here in Howtown.

The Local Mountain Rescue Team together with Howtown Outward Bound staff,  the Army and the local community, have worked incessantly during the past week, clearing the road and supplying essential supplies for visitors and locals alike who have been trapped in the valley, with those who chose to leave being helped to do so by the Mountain Rescue Team.

We feel desperately sorry for the other communities who have not been so lucky; Glenridding and Patterdale where Desmond has wreaked total devastation and just down the road from us, Pooley Bridge, where  the 16C stone bridge crossing the River Eamont and providing the main artery to the rest of the Ullswater Valley was washed away as if made of cardboard. Much work is to be done as these local communities fight to regain the infrastructure that Desmond has taken from them.

Looking forward to 2016 at Howtown,  we are hoping beyond hope for a period of good weather so we can start the drying out process of this particular corner of the Lake District in earnest.

There are now hectic months of work ahead to make sure that the valley is ready for visitors once the 2016 season begins and the Hotel re-opens on the 19th March.

We all feel we have been relatively lucky here at The Howtown Hotel.