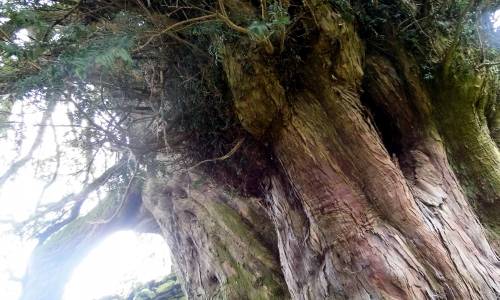 I just wanted to share with you my knowledge of the Yew Tree of Martindale especially as it is has been shortlisted for England's tree of the year.

The old Yew at the church of St Martin is estimated to be around 1300 years old. The subject of myths, legends and Acts of Parliament and held sacred by the Druids in Pre Christian times, the yew is believed to ward off evil spirits and help lost souls find the afterlife, the Yew tree was commonly planted in cemeteries to act as a guard to those who resided there.

And so, the Birkett tomb in Martindale Old Church's graveyard, where the first priest of St Martin’s, Richard Birkett, is interred. is in situ directly in front of the yew,  His epitaph states that he was 95 years old when he died and left a sum of £100 "towards the better maintenance of a godly, sober and religious Minister at Martindale Chapel"

A tree of legend it was believed that during the War of the Roses the bows of archers were made from the wood of the Martindale Yew.

Avoided by animals and humans alike due to most parts of the yew being poisonous  - even Macbeth concocted a poisonous brew which included “slips of yew, silvered in the moon’s eclipse”  - it is interesting to note that the Red Deer, for which Martindale is famed, seem to be able to occasionally graze on the yew with no ill effects.

To view the gallery associated with this diary entry click here