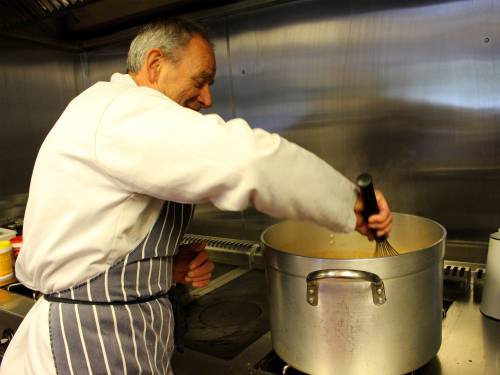 WE wanted to share with you just what has been happening in Howtown over the past few months when the weather has brought snow and rain mixed with the odd spectacular bright day, although as we speak it is seasonably white with snow and temperatures are down to below -5 which is more in keeping for early February.

This winter has seen the coppicing and clearing of the wooded area at the side of Fusedale Beck continue. There are a mixture of trees here, the majority of which are Elder. So it is nice to make the connection that the wood from the elder was used to make the bobbins essential to the bobbin mill, located at the bottom side of the beck. The Bobbin Mill is now the Martindale Parish Hall and hosts a number of community events throughout the year.

Over 1,000 daffodil bulbs were planted under the trees in January, adding to the mix already there – so as we come into Spring, snowdrops will be followed by daffodils, then the bright yellow / orange of the wild poppies will be peeping out amongst the ferns which thrive in the moist soil as the trees stand above.

Our Howtown Chef, Colin Akrigg has been busy. Although he has spent most of the time in his kitchen, you may well have seen him out chopping logs if you ventured past the Hotel on one of the brighter days. Never one to be idle, Colin has just finished making jars of marmalade – an old Howtown favourite - as well as a number of chutneys, with Mrs Baldry never failing to come up with new flavours. They are to be used as accompaniments in the dining room but are will also be available to buy in the Tearoom if you wish to take a taste of Howtown home with you!

We also have good news about the rebuilding of the bridge at Pooley Bridge – Although the Temporary one has served us well, it can be can be a little noisy as the traffic crosses and it will be good to see a permanent structure put in place. 3 designs were put forward and after much consultation with locals and professionals the choice was made for an arched bridge with open spandrels sitting quite low in the landscape.

The design also incorporates some of the stone from the original bridge in the build, which will start at the end of 2018 and the new crossing put in place by spring of 2019

So as we enter February, we await the arrival of many of our regular staff, once again making their way to Howtown after having returned home for a well-deserved break.

We look forward to the coming weeks, the longer days, the green shoots emerging in the garden, and the unfolding of a new season as we open our doors once more on the 23rd March.