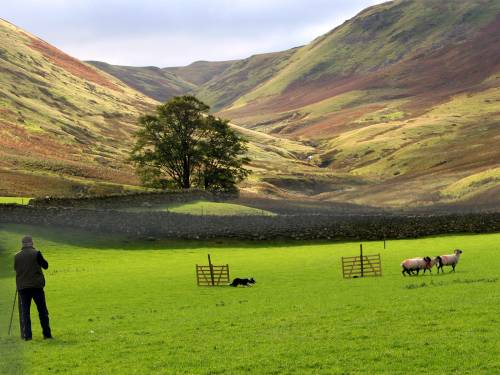 Looking back from summer and through into early November here at Howtown, it seems as though the season has raced along. The changeable weather and high winds brought with the onset of Storm ‘Brian’ meant that our usually vivid October colours were short lived and the roads have been covered in a carpet of leaves for quite some time.

However, on the days when the sun has shone it has done so spectacularly; one such perfect day being Sunday the 8th October which saw the return of The North Westmorland Sheepdog Trial Society, to Cote Farm.

Providing an idyllic setting and perfect field sizes for the trials, the day consisted of 3 classes with Mark, the Cote Farm Shepherd and his young dog Spot competing in the Novice Dog Class. An experienced handler, Mark and his sons Antony and Matthew regularly attend trials throughout the North of the Country, so it was no surprise that on his first time out this year he achieved second place.

The red deer of Martindale made their annual pilgrimage down to the lower valleys for the start of the rutting season during October and the battle cry of the males could be heard bouncing from fell side to fell side.

If you have never visited at this time of year before it really is worth seeing, and because the deer come so far down into the valley it is possible to get quite close especially early in the morning or at dusk when the rutting stags are an amazing sight.

The Tearoom is now ending its second season and Diane’s sausage rolls seem to have made an impression on many of our visitors. Baked fresh every morning they have had mentions via Facebook, instagram and on twitter, and we have even had visitors travelling by steamer across from Glenridding just to collect some to take on their journey home.

This morning – we woke to a light dusting of snow on the hilltops and the realization that there are a few days left until we close for the season after lunch on the 12th November.

As winter begins to make itself know in the valley we hope that the rather disappointing weather of Autumn is behind us and the coming winter will bring crisp, bright days to the valley, just perfect for long winter walks and nights by the fire.

It seems a long time from November 12th until we re-open in March but rest assured that we will not be slacking just getting everything ‘ship-shape and Bristol fashion’ for the start of the new season in 2018.

To view the end of season gallery click here