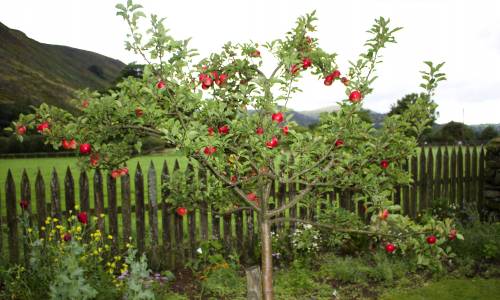 As the season comes to an end here at Howtown the weather continues to be mild and dry, with the colours of Autumn as good as I have ever seen. Combined with this we have also had a bumper crop of fruits from early summer right through to Autumn.

The Black Cherries were produced in abundance in July and this reminded me of the legendary ‘Black Cherry Sunday’ which was a tradition in our hamlet of Martindale in years gone by.

Martindale was a district famous for the growing of Black Cherries and was known as the only place in the Lake District where Black Cherries were grown in any considerable quantities. ‘Black Cherry Sunday’ which became ‘famous’ throughout the area was the day of harvest for Martindale, which I believe, occurred the second Sunday in July.  A report published in The Westmorland Gazette of July 1855 stated that: 'There was a goodly attendance of the young folk of both sexes from the neighboring vales and hamlets, and also from Penrith and other more distant places, who met at Mr Swinburn’s the Buck Inn, where they heartily enjoyed themselves in eating cherries.'

I have read that the Cherries were introduced to the area by the Romans. It is said that as they marched the Roman Road that we now know as ‘High Street’ they would throw the pips of the cherries down into the surrounding area and the pips grew into the trees for which Martindale became so well known.

It always amazes and delights me to be able to find something new out about this area which has become my home and although some readers may have known about The Black Cherries of Martindale, being a bit of a history boffin, I just wanted to share the information with others.

Having lived in this area for such a long time, sometimes the beauty and opportunities of the fells and lakes have become rather taken for granted. This year, we at Howtown were especially pleased to receive two awards from The Good Hotel Guide.   The Editor’s choice for Walking and the Editor’s choice for Fishing –The Good Hotel Guide being the leading independent guide to hotels in Great Britain and Ireland, written by award-winning journalists for the reader seeking impartial advice on finding places to stay.

This season at Howtown has been one of change for us all but without exception these changes have been embraced. It is good to see that progress has been made but that the essence of all that is good about Howtown and this idyllic part of Lakeland remains.